x
by MoparUnlimited
on May 5, 2019
under Uncategorized
∞ Permalink 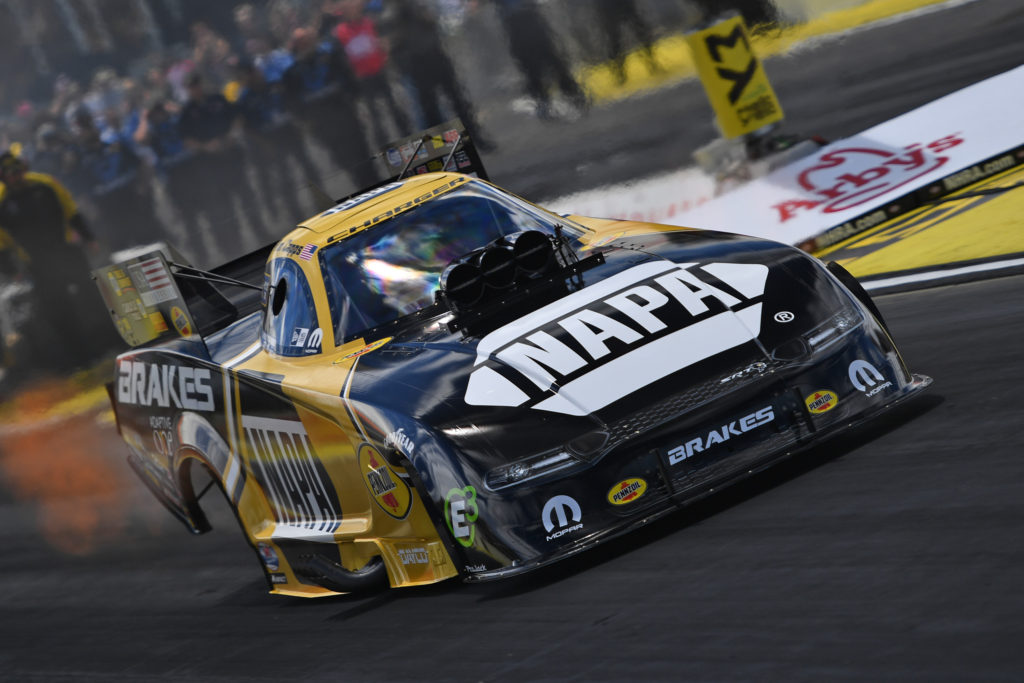 May 5, 2019 , Commerce, Georgia – Ron Capps became the second driver to put a Mopar-powered Dodge Charger SRT Hellcat Funny Car in the winner’s circle by racing the Don Schumacher Racing (DSR) machine to victory in the 39th annual Arby’s NHRA Southern Nationals at Atlanta Dragway in Commerce, Georgia, on Sunday, May 5.

Capps, one of six Mopar-powered Dodge Charger SRT Hellcat Funny Car drivers in Sunday’s field, earned his 62nd career win, first of 2019 and third career triumph at the track. Tommy Johnson, Jr. reached the semifinal while Jack Beckman, Matt Hagan, Cruz Pedregon, and Jim Campbell were unable to advance past round one. Leah Pritchett raced her HEMI-powered DSR Top Fuel dragster into the second round.

The victory for Capps was well earned for the 2016 Funny Car world champion. He started the day from the No. 11 position and opened eliminations by taking down last weekend’s Charlotte winner, Shawn Langdon, in the first round with a run of 4.076 seconds. Next in his path was 16-time champion John Force and their 101st career match-up. For the fourth straight year, Capps defeated Force in the Southern Nationals by making his best run of the day at 4.022 to Force’s pass of 4.312. In the semifinals, it was an all Mopar/DSR match-up with Capps out-dueling Johnson, Jr. with a run of 4.071 to reach his seventh career final at the facility.

The final pitted Capps versus Tim Wilkerson and it marked the third time in the past five years the duo would race for the Atlanta victory. Wilkerson won in 2015 and Capps was victorious in 2017. On Sunday, Capps was quicker off the starting line and he earned the holeshot victory with his run of 4.068 seconds compared to Wilkerson’s pass 4.052. The margin of victory was 0.0102 seconds (approximately 5 feet).

Despite coming up short in his semifinal matchup with Capps, Johnson, Jr. was extremely happy with the performance of the DSR Make-A-Wish Dodge Charger SRT Hellcat Funny Car. In the first round, he avenged his first-round loss in Houston to DSR teammate Matt Hagan with a run of 4.037 seconds and in round two, he defeated reigning Funny Car champion J.R. Todd with a smooth pass of 4.334 to win over Todd’s tire-smoking run of 10.638.  By reaching the semifinal, Johnson jumped back up into the top-five in the championship standings heading to Richmond.

After finishing runner-up in Atlanta last May, Matt Hagan was looking to capture his second career victory at the track and score his second win of 2019. Qualifying proved to be difficult for everyone in the class Friday and Saturday with the changing weather conditions and the result was Hagan qualifying the Dayco Mopar Dodge Charger SRT Hellcat Funny Car in the bottom half of the field for the first time this season. He squared off with Johnson in the first round and his run of 4.113 seconds at 287.35 mph couldn’t keep pace with his DSR teammate’s Hellcat Funny Car. Hagan continues to rank second in the championship standings through seven events.

Two-time Southern Nationals winner Jack Beckman made his best run of the weekend in Sunday’s opening-round match-up with 16-time Funny Car world champion John Force, but it wasn’t quick enough to advance. Beckman muscled the Infinite Hero Dodge Charger SRT Hellcat down the Atlanta track at 4.040 seconds at 312.78 mph only to see Force deep stage, take the starting line advantage and lead throughout the run with his lap of 3.994 ET at 327.74 mph.

In Top Fuel, going back-to-back in Atlanta was the goal of the weekend for Leah Pritchett and her DSR team led by Neil Strausbaugh and Todd Okuhara. The 2018 Southern Nationals champion was looking to become only the fourth Top Fuel driver in the event’s 39-year history to score consecutive event wins in a rail car and first since Doug Kalitta accomplished the feat back in 2005 and 2006.

With Mother Nature knocking out the final qualifying session Saturday, Pritchett began her Atlanta title defense from the fourth position. She was machine-like in her opening round race with Audrey Worm, posting the fourth-best run of the session with her lap of 3.812 seconds at 317.79 mph to earn lane choice in round two. In the second round, Pritchett faced Jordan Vandergriff for the first time and she got the starting line advantage, but her run of 3.898/306.95 came up 0.0105 seconds (approximately 5 feet) short of earning her the victory. Pritchett gained two positions in the standings and heads to Richmond fourth.

Jerry Hatch and Jack Zimmerman added their names to the list of Dodge Top Finisher award winners at Atlanta. Lubec, Maine, native Hatch steered his 1970 Dodge Challenger to a third-round finish to claim the honors in Super Stock, while Zimmerman, hailing from Clemons, North Carolina, earned the honors in Stock in his 1971 Dodge Challenger.

The Dodge Top Finisher award, now in its third year, awards $500 to Stock Eliminator and Super Stock drivers who advance the furthest behind the wheel of a Mopar-powered Dodge, Chrysler, or Plymouth race car at all 24 NHRA national events.