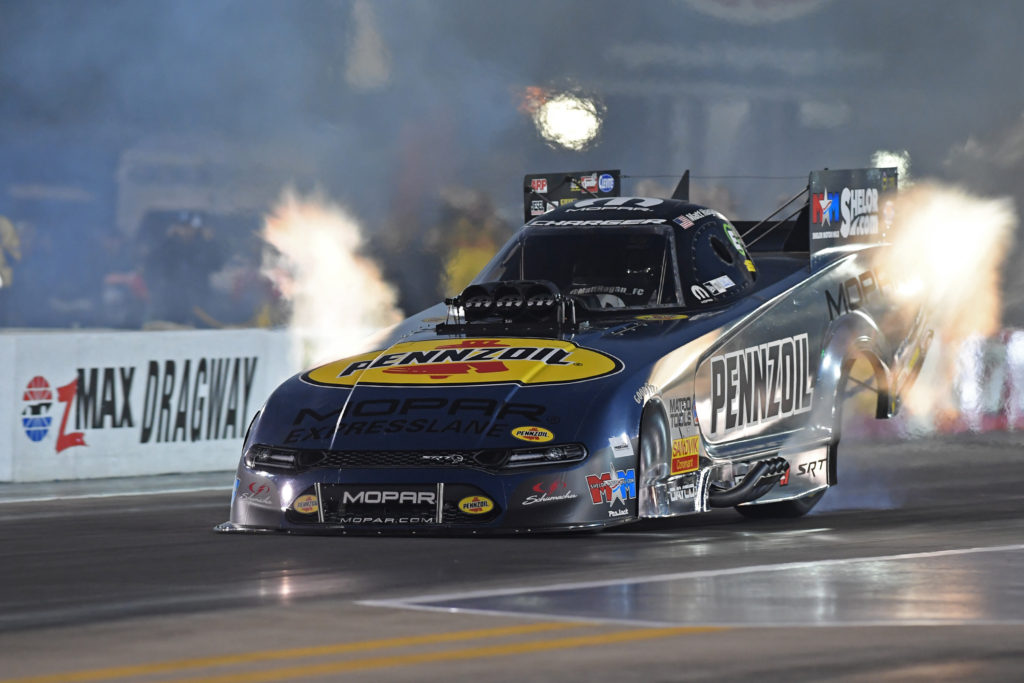 Starting from the No. 6 position, Pennzoil Mopar Dodge Charger SRT Hellcat Funny Car driver Hagan finished second out of four drivers in the opening round of the unique “four-wide” racing format to advance deeper in eliminations on the strength of a 3.953 second elapsed time (ET) at 325.14 mph, his quickest pass of the weekend. In the next four-driver pairing, Hagan posted the quickest pass to continue on to the final quad.

Hagan, the 2013 winner at Charlotte, matched up with Force, Robert Hight and Shawn Langdon in the final foursome of the day. Chasing his second win of the season, the two-time Funny Car World Champion smoked the tires early and was forced to settle for a semifinals finish, with Langdon taking the event win. Hagan remains second in the Funny Car point standings.

Pritchett was hoping to end the day at zMAX Dragway with her first Four-Wide Wally trophy, but a loss of traction in the final round dashed her hopes at her first triumph of the year.

Pritchett and her Pennzoil Mopar Dodge team posted the third-best run of the final qualifying session to secure a spot in the top-half of the field. In round one, Pritchett led her quad with a solid 3.775 E.T. In the second elimination session, a blower belt caused the seven-time Top Fuel winner to slow to a 3.947 but it was enough to earn a spot in the final elimination quad where she eventually fell to reigning Top Fuel world champ Steve Torrence and Clay Millican, recording a semifinal finish.

“Fast” Jack Beckman looked to be on a bee-line to the winner’s circle in the early going on Sunday at zMAX Dragway in his Mopar-powered Infinite Hero Dodge Charger SRT Hellcat Funny Car. After banking five total bonus points en route to the No. 2 qualifying spot, DSR driver Beckman was quickest in his first foursome grouping in eliminations, clocking a 3.925 ET at 324.83 mph to advance.

Unfortunately, the 2012 Funny Car World Champion’s run ended in round two, thanks to a dropped cylinder that forced Beckman to pedal his car to a losing 7.194 ET finish. Beckman’s performance moved him up in the Funny Car standings, where he now sits tied for fourth.

Tommy Johnson Jr. entered the weekend seeking his first zMAX Dragway win and qualified the Make-A-Wish Dodge Charger SRT Hellcat No. 4. He posted a 3.978 E.T., the quickest of the first round, to score the victory over his competition. In round two, Johnson found himself stacked against three former world champions. His machine was on a good pass before hazing the tires just past halftrack, allowing his lane four opponent to pull ahead and nab the win, ending Johnson’s day.

As the No. 10 qualifier, NAPA Dodge Charger SRT Hellcat Funny Car driver Ron Capps faced tough competition in his round-one elimination quad, which included teammate Jack Beckman, Tim Wilkerson, and Dave Richards. Capps stood on the gas and his machine lost traction shortly after, slowing to a 5.172-second pass which wasn’t enough to set off the win light.

In NHRA Factory Stock Showdown competition, defending class champion Pritchett, once again pulling double duty in her Top Fuel and Factory Stock Mopar Dodge Challenger Drag Pak machines at Charlotte, qualified in the ninth position. Pritchett left first in the opening round with a stellar .011 reaction time in her Drag Pak and maintained the lead at half track before opponent Bill Skillman was able to get past and beat her 7.945/173.21 run to nudge out Pritchett by three feet for the win.

In Stock Eliminator, Kelly Mack from Dartmouth, Nova Scotia, Canada, drove his FS/C 2009 Mopar Dodge Challenger Drag Pak to a round three finish at the NHRA Four-Wide Nationals. Motivating Mack’s Drag Pak to low 10-second ETs is a Mopar 6.1-Liter HEMIÒ engine. Despite running consistent all weekend, Mack bowed out on a redlight foul in the third round of eliminations after leaving the starting line a bit too early. For advancing the furthest in competition, Kelly earned Dodge Top Finisher honors in Stock Eliminator.

Dave Thomas from West Chester, Pennsylvania, drove his FSS/F 2011 Mopar Dodge Challenger Drag Pak to a second round finish in Super Stock at Charlotte. Powered by a Viper V10 engine, Thomas qualified 11th out of 52 Super Stock entries with a run of 9.33 seconds and was looking strong during eliminations. Unfortunately, a slightly tardy reaction time against his opponent ended Thomas’ quest to advance to the next round. Thomas collected the Dodge Top Finisher award in Super Stock.